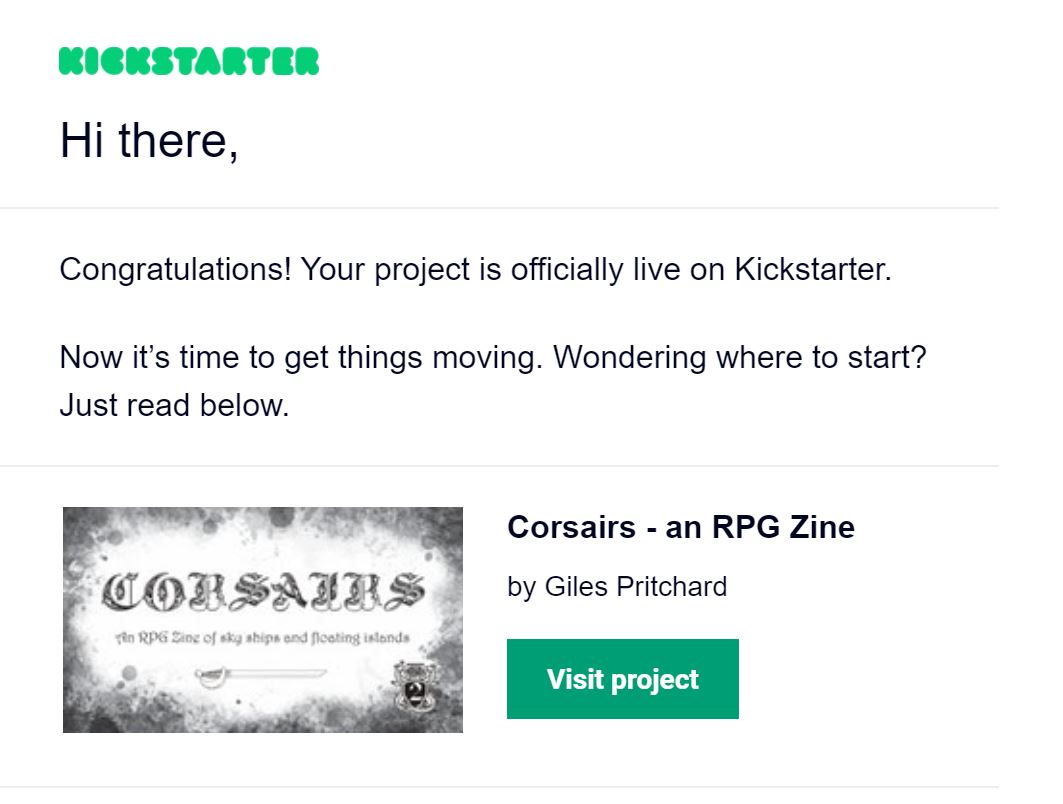 Before the Kickstarter launched I had a mailing list that was in an infancy, with fewer than a dozen subscribers. I had a social media presence on Facebook and Twitter, and posted very occasionally on indieRPG forums on Reddit. I’m not sure now of the exact metrics, but I had a Facebook page for my company with almost zero likes on Facebook, but I was a member of, maybe two, Facebook groups of relevance. I think I had somewhere around 650 or so followers on Twitter. I did not have a presence on Instagram, or any other social media service. Twitter and Facebook, those were the two largest social media presences I could use to spread the word when my project went live.

Of course, in addition to whatever audience I could generate on my own, being a part of ZineQuest, and tagging posts about Corsairs appropriately, meant that there was a ready audience that could be tapped into; people who were knowledgeable about the ZineQuest, and keen to see and support zines connected to it. Many of these were also creators of their own ZineQuest projects.

What did I do when Corsairs launched? I posted everywhere I could think of… I posted on Twitter, on Facebook, on my company page on Facebook, I dashed off a company email, I blogged about it, I tagged everything with #ZineQuest, and I launched my project the second ZineQuest went live. I launched my project the second February rolled around (and that would mean half a day ahead of the US given my location) in the hope that being early in, would mean that there would be fewer zines up, meaning Corsairs would be jostling with fewer projects for notice. I was hesitant to post too often to Twitter, as I didn’t want to pester my followers, but with hindsight I think that next time I would post more.

I had also been writing a series of blog articles journaling my progress and planning with the Kickstarter, with two key reasons in mind:

Corsairs launched on the 1st of February, 2020. By the end of the first day it was over 50% funded, and passed the funding goal early on the third day. It wasn’t a ‘Funded in 3 seconds’ Kickstarter, but it funded pretty quickly, and more quickly than I expected. It had a relatively high Funding Goal compared to some ZineQuest projects, but not excessively so.

I posted updates to the Kickstarter page. I shared them on Facebook, Twitter, and anywhere else I could think of… Then around day 6 the project slowed right down, and the flow of backers dried up. I had posted lots of places, I had said: ‘Hey! Check this out!’, and I had said it in as many places as I could think of. I was running out of places to say things, and the influx of backers slowed to a trickle. I had hit my bubble…

I remember clearly sitting at my computer and thinking to myself that I had yelled about my project everywhere I could think of… that the people who follow me who might back this project have either already done so, or are not going to… What now? I thought to myself in that moment. What now?

I felt that yelling again about the project was going to achieve nothing, the people I was going to reach through the avenues I had used had already been reached. I had filled my bubble with the announcement, and all who had ears to listen had heard it… had backed it or hadn’t. I had hit the limit of my social media reach, I had hit my bubble, and no amount of yelling was going to reach more people. It was a surreal feeling, a tangible sense of the intangible networks we surround ourselves with. Social media feels like it is a cavernously vast space that our voices can echo through endlessly. To feel edges, a boundary, was strange… What now?

One of the things I loved most about the ZineQuest experience as a whole was the opportunity to interact with other creators. It felt like a very communal experience, with the vast majority of the people I was lucky enough to engage with overwhelmingly supportive of each other and each others work. From the start I had decided that I would take an active role in that communal spirit, it was laden with an energy and hope for success. Amplifying other voices, the work of other creators poses an interesting problem, I wondered to myself how many people who would potentially back my own project would I lose if I started sharing links to other zines… From the beginning, when I decided to take an active role I decided that I would place my hope in the old maxim that the rising tide floats all boats. In the last paragraph, I wrote of the moment I sat wondering, in the small hours one evening about 6 days into my Kickstarter, what now? Well part of that answer happened naturally out of my choice to try and like and share other projects. As I liked and shared other projects I found, unexpectedly, that other creators liked and shared mine in return. It wasn’t something I had planned, it wasn’t something I asked for or expected, but slowly the trickle of backers grew.

I think a project is also like a rolling stone, a project gaining backers is like a rock gaining momentum, and engaging those backers and being active on social media were, I think, the key things that kept my project rolling.

Had I been organised I could have gone on podcasts, tried to use Facebook advertising, had social media goals linked to the project, or any number of other options. But I didn’t really consider the fact that I exist within a bubble, and what I could do to market the project outside of that bubble. I wasn’t prepared for it, will I be next time?

I think a few things I have learned from Corsairs are that I don’t need to write so many updates, and that equal to that, it is ok to share an update more than once on social media. Next time I think I’ll aim for fewer updates, and more active use of social media to share and share again the project. If I share on Monday morning my time, that might mean it’s hitting American followers just before midnight Sunday… By the time they wake and check their social media, that post is long gone. It’s ok to share things multiple times, and its’s ok to share and amplify the voices of other creators.

Corsairs taught me a lot, it also grew my social media following, increased my email list, and grew the audience that I had. I think, in reflection, that this is one of the more powerful things a running a Kickstarter, especially if you are a small time creator, has to offer. It can increase the list of those who follow you, allow you to reach more people in subsequent attempts, it doesn’t burst the bubble, but it does help it grow.