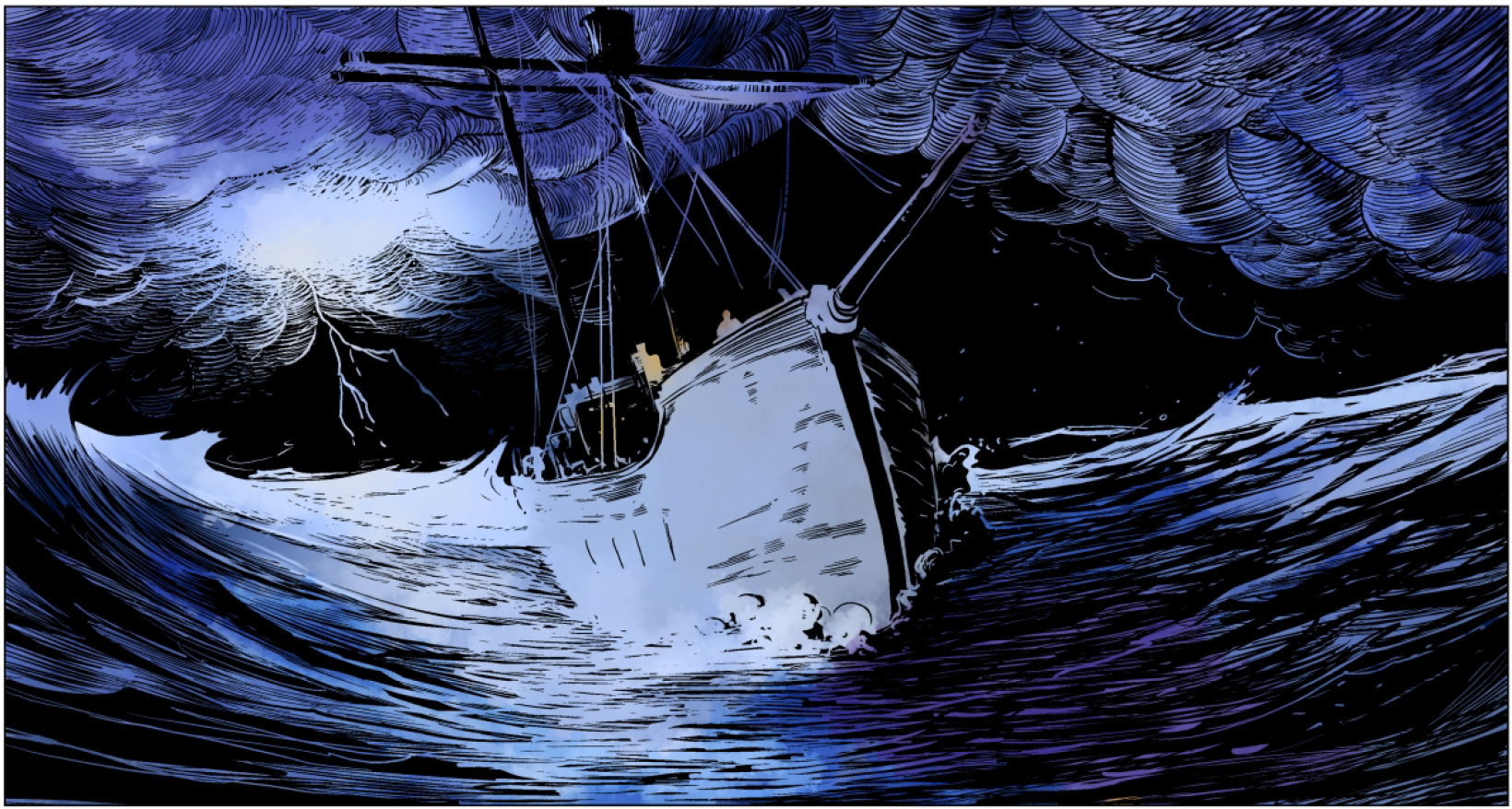 Last year, around June, I wrote a comic book for Guf Studios and Thunderworks Games. It was the most enjoyable piece of freelance writing I have undertaken, and so very different from anything else I have worked on.

This year it is being published alongside the expansion for the hugely successful boardgame, Roll Player Adventures. You can check out the Kickstarter here.

The comic I wrote is the story of Kaemon and Pitlin, characters you can meet in the Roll Player Adventures game. When you meet them there is some tension in the air (I won’t get into spoilers), and I thought it would be fun to wind back the clock on these two characters, and find out how they ended up in a life on the high seas.

The comic takes place about 20 years before the events in Roll Player Adventures, and begins with Kaemon and Pitlin as vagabonds on the streets of Cutty’s Landing.

Writing a comic book was a challenge. Having 28 pages across which to spread the story, being mindful of when and where the story sits on the pages, what story beats take place across a two page spread, what to leave to the turn of a page, how to flow the action visually from left to right, all of it was such a fun way to visualise and write a story.

It was amazing to work with Juan Ochoa, the artist for the Kaemon and Pitlin comic. I’ve worked with Juan before on my games: Rascals, Owlbear Omelette, and soon on Prisoners of the Elf King, but this was a magnitude more involved. Juan did an outstanding job of bringing the story and world to life, and his art is stunning throughout.

The above piece is a single cell that spreads across the top of the page. Just prior to this (on the previous page) the characters experience a pretty rough wake up call, this page starts with a storm breaking – a visual metaphor for the characters hitting a moment of stark realisation. Kaemon and Pitlin develop something on this page: resolve, and the page ends with calmer skies. Probably no-one in the world will notice or care about this transition as a visual expression of the characters’ state – but it’s little things like this throughout the story that I absolutely loved thinking about.

I realised when writing this story what a visual thinker I am. When working on it I had a large whiteboard behind me with numbered bullets in two columns – 1 through to 28, arrows to show which pages were double spreads, and next to each of the bullets a quick note about how the characters enter and leave the page – all mapped against my outline. In front of me, while writing, I had an A4 sized whiteboard – I imagined how the characters and story moved through the page and drew out the empty cells, then on the computer I wrote the script that flowed from this process. I have no idea how other people work on comics, but this method worked for me, and I absolutely loved every minute of it.

As an aside, here is the script for the cell above:

The Dagger is being rolled in heavy swells and pelted with rain. Lighting dances around the masts. Raging storm clouds blot the sky. The ship is visible in varying levels of detail, lit by the lightning around it. Figures are still at work in the rigging, scuttling up and down the ratlines, and on deck tied together with ropes.

Blackjacked Buccaneers is one of four comics in the World of Ulos graphic novel. I had a huge amount of fun writing the script, and thoroughly enjoyed working with Juan, as well as the wonderful teams at Guf Studios and Thunderworks games.

You can find The World of Ulos graphic novel, and the Roll Player Adventures expansion, on Kickstarter here.