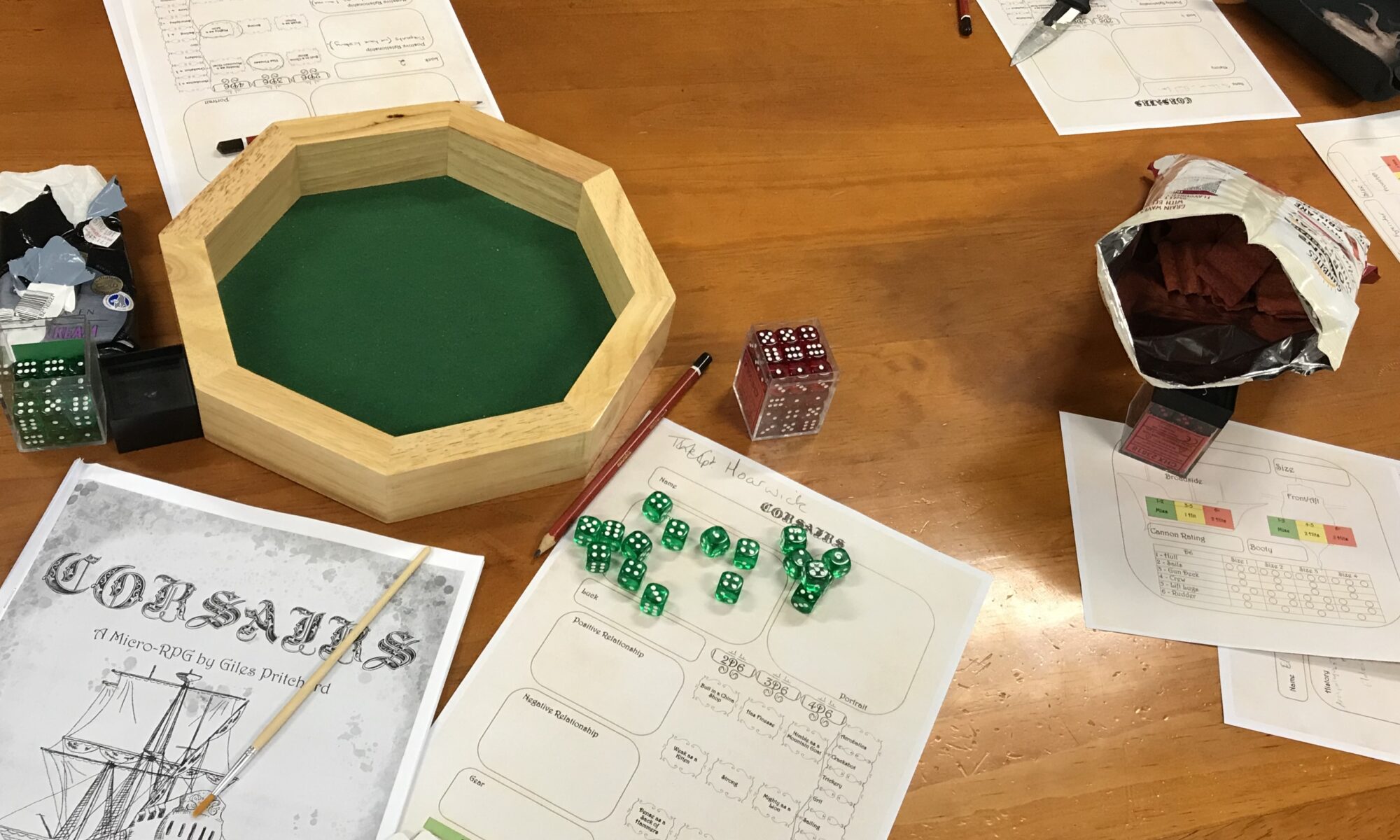 Before trying to math out either answer I looked through a slew of the ZineQuests from 2019. It’s one thing to have an idea of how much the game might cost, but it doesn’t exist in a vacuum. Customers have expectations, and setting too high a funding goal, or setting the backer levels significantly higher than what has been charged in the past for similar products is going to turn potential backers off. Underneath all of this too, was the concern about the shipping costs. Shipping from Australia, as I wrote in my last post, is expensive. Whatever price I set for the backers who wanted a physical copy had to respect the fact that an additional cost was going to be tacked on, and for international backers, that was a significant amount ($2.20 domestically, $8.30 internationally).

In my last post I broke down the costs as I had worked them out so far, here I want to look at what they would be per copy of the zine. So what were the costs looking like in an ideal scenario?

Okay, so that all makes some sense… but it is not as simple as all of that. I could order print runs in multiples of 50 (50, 100, 150, etc). I wanted to take into account a margin of 10% losses in shipping, meaning that 10% of the packages would get lost somewhere en route, and I may need to resend them. I accounted for this by essentially saying to myself that if I get within about 10 of the next multiple of 50, I would print the next level up. With 30 backers I would print 50, but if it climbed to 40 backers I would print 100, I would have enough therefore to account for any losses. This introduces some issues, if I got close enough and printed the next amount up, but didn’t get too many more backers, the costs would be defrayed over fewer backers. The per zine costs above are only if I actually sold all 200 copies. If I sold only 140, the trigger point for raising the print run from 150 to 200, the costs would look like this:

Overall, for printing, envelopes, labels, and the absorbed shipping it would be around $6.47 per zine, a jump of around $1.30.

In all of these calculations I haven’t included any costs for labour. The design, writing, editing, layout, none of that is included. Profits on the zine equate to pay, so I was content to leave it at that, but had to ensure I set the appropriate backing level. The other thing to consider is tax, but I’ll write a tangential note on that another day.

If I had set the backer level at $10 for the printed zine, with a cost of around $7.76 per zine, I was worried that if anything went wrong I would end up losing money. What could go wrong? The costs could go up of course, the price of printing, or shipping, any of those things. But of biggest concern was the exchange rate. All of my calculations are in Australian dollars. If that loses or gains value against international currencies it could lead to a big impact on the money raised, in Australian dollar terms, which is what I would be using to pay for everything. The exchange rate was also in my favour, with the Australian dollar weaker than the US dollar and the UK pound, meaning, I hoped, a more attractive price for international backers. But the risk of increasing or decreasing the money raised due to fluctuations in the currency was there. In the end I settled on a backer level of $15 AUD, which would roughly equate to $10 USD – very much on par with the cost of other Zine Quests.

But what of the Funding Goal? Using the ‘worst case scenario’ above:

If I assumed that in the best case I would get 200 backers wanting the physical copy, I would be spending around $250 on absorbing shipping costs, the total costs based on that estimate, and using the ‘worst case scenario’ for the rest of the costs, adds to $1055. Add 10% for Kickstarter and 10% for screw ups and that comes to around $1266. There are also other costs as well – test prints, software, ink, all the other bits and bobs I spent while drafting and making Corsairs. In the end I settled on a Funding goal of $1500, after all, many of the Kickstarter FAQs advise setting a thicker margin for error, because…

Another thing to consider is dropped backers. After the dust has settled and a Kickstarter has finished, there are a number of backers who, for whatever reason, drop out. While a funding level may look like it got $1000, it may in fact have only raised $850 because a number of backers have dropped out. A drop of a few hundred dollars in lost backers could have a significant impact overall.

So with all the mathing out of the way I had settled on my Funding Goal of $1500 AUD, and the backer level for the printed copy at $15 AUD. I decided to drop the price for the digital only copy to $10 AUD (about $6.70 USD when the Kickstarter launched), because that seemed on par with the costs of other zines in the 2019 ZineQuest.

Two things changed over the course of the Kickstarter: 1) I swapped my printer to Mixam, which meant a significant drop in the cost of printing. And 2) I realised that Kickstarter would take 10% of the shipping fee as well (yes, I was stupid), luckily I built in a margin and had a reduction in the printing costs.

So how did it wind up? Corsairs ended with 149 backers wanting physical copies, which was high enough to push to the 200 copies I was hoping to print, but was also close to the worst case scenario in terms of costs for printing that many copies.

Ending by writing that the Kickstarter resulted in a worst case scenario sounds gloomy and ungrateful. This is not the tone I intend, Worst case scenario in this context was my short hand for the different calculations I was using. I don’t mean ‘worst case scenario’ in a bad way – Corsairs funded, has been fulfilled, and exists in the world – believe me when I write that I was elated when it funded and am thrilled still!

4 Replies to “Levels and Goals…”