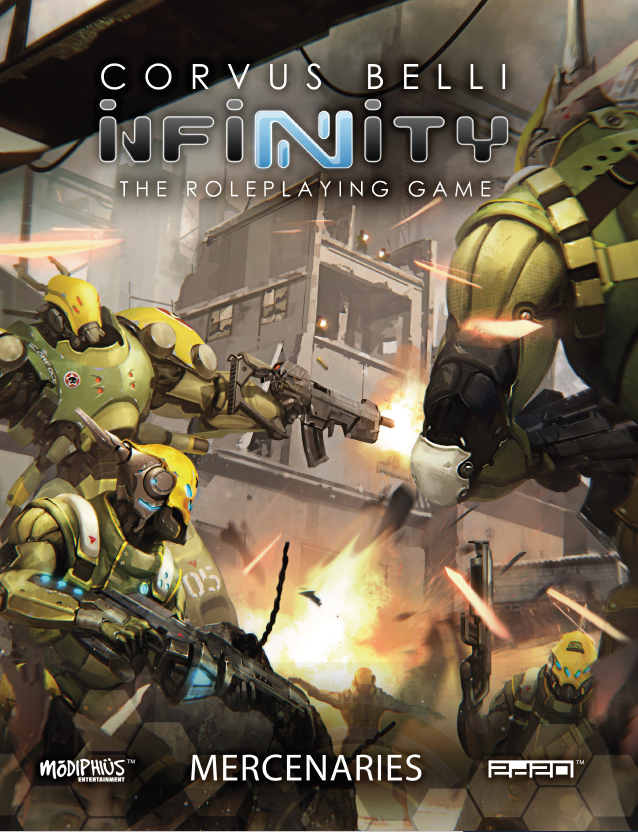 It’s been a little while since I wrote about anything other than my latest game: Corsairs, but other things have been happening as well!

In the last few months three new source books have been released as a part of the Infinity: The Role Playing Game line. Going back over my spread sheets, across the three latest source books I wrote 7 chapters, totaling a little more than 53,000 words. It’s nice to finally see them released!

I have to say the cover art for these books is fantastic, and I am immensely proud to have contributed to all three of these source books. With the number of books left to produce from the Kickstarter dwindling, I wonder how long I’ll be working on Infinity. I can’t say at this stage, but I have enjoyed my time exploring and helping to expand this universe!

On to the books!

Soldiers of fortune, bodyguards, pirates, cut-throats, and heroes. The worst villains and the greatest heroes of the G5 can all be found in this great melting pot of freelancing warriors. From the flickering bulbs of Novyy Bangkok’s fighting pits to the luxuriant skyscrapers of San Pietro, there is always someone willing to pay for their problems to be met with belt-fed subtlety and under-barrel discretion. Lone wolves, invisible techno-pirates, and even squads of murdering reavers, the mercenaries of the Human Sphere follow age-old traditions and work for the highest bidder, adapting and using all the latest technologies. Strangers to the ideals of patriotic love or loyalty, hard cash—or even better, solid quantronic credit accounts!—is the way to their hearts, and even more cash is the key to their loyalty.

From the construction of the first orbital elevator to the ongoing conflict in Paradiso, many factions have turned to mercenaries for cost-effective violence and intimidation. Whether escorting doctors and refugees out of Ghezirah, providing close protection for paranoid executives across Neoterra, or brutally resolving a miner’s strike in Human’s Edge, the mercenaries of the Human Sphere will take your money and get the job done. Never have mercenaries been in higher demand thanks to the political situation in the various theatres of the Sphere, and both Hypercorps and G5 governments employ the services of these soldiers for hire. Sometimes in the open, sometimes undercover, it seems these lords of war are a necessity in the power games of the future.

But the life of a merc isn’t all bullets, venture onto the War Market where the cold and pragmatic business of war has never been so civilized. Meet Free Company Captains and review their units according to their performance both in the battle and in Maya. Your preferred company may be cost effective, but are they giving their extra with the WarCors and livestreams? Because in the Human Sphere, everything is about how good you look to the public!

We have fun, games and the bloodiest war in the Human Sphere! One of the most fertile planets known, living in this angry planet is a test for the hardiest settlers and warriors. Keep your wits about you or the jungle, its inhabitants or something worse will swallow you whole in an instant.

Hiding a tragic and terrible past, Paradiso is home to dark secrets and intrigue. Even before the NeoColonial Wars, the jungle planet has been the theatre of brutal conflict, destined to loom through the histories of numerous civilisations, human and alien alike. Never have the stakes been so high for Paradiso is the grandest trophy in the Sphere. Not only for the vast wealth offered by the system itself but with wormholes connecting to two alien powers, Paradiso is a Rubicon that if lost would lead to the Downfall of the Human Sphere.

Fame, glory and fortune wait for those brave or foolhardy enough to risk the dangers of Paradiso, so gear up and don’t miss the next Orbital Elevator planet side! Join the Human Sphere’s mightiest warriors and try to stop the Evolved Intelligence’s onslaught or lose yourself in populous cities under siege while you try to figure out who the infiltrated spy is feeding information to your enemies. Make sure you bring all your best equipment and don’t forget your bathing suit, for things are about to get hot in the Meat Grinder also known as Paradiso.

From the darkest reaches of the galaxy, an implacable tyrant looms slowly and inexorably, searching for intelligent races, studying them, contacting them, and ultimately absorbing them. Behold the Evolved Intelligence, an alien virtual entity bent on achieving the godlike state known as Transcendence. To reach its objective, the EI will use every tactic and strategy necessary to increase its almost infinite knowledge of the universe. This includes shrewd political alliances, peaceful unification, and where necessary, all-out war.

The Combined Army sourcebook gives players the opportunity to approach the Paradiso conflict from the other side and GMs a vast array of information to better understand the implacable enemy of the Human sphere.