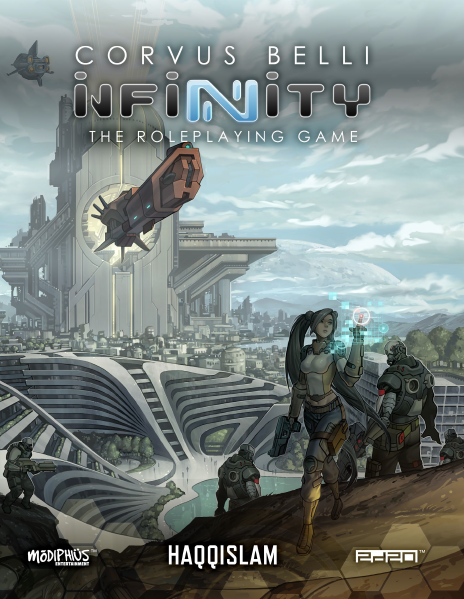 So nice to see some of the books I’ve worked on getting released into the wild. The latest of these is the Haqqislam source book for the Infinity RPG. I know I’ve written it before, but it really is amazing to see all the work of so many talented people coming together into a final product. The Haqqislam source book looks fantastic, and I’m very proud to have been a part of the team that contributed to its creation.

I love the cover art work, but the book is also choc full of great information, background, rules and art.

I worked on the Bourak chapter, and had a lot of fun exploring the planetary home of the Haqqislamite empire. The Bourak chapter is only one part of the book however, many other writers contributed to make this a wonderful source book for the Infinity RPG.

The Haqqislamite movement found traction in a world riven by political turmoil and economic crises. Its greatest messenger, Farhad Khadivar, advocated a new ideology that wove together the many complex threads of the old into a New Islam. This philosophical and theological revision of long-standing interpretations, which shed intolerance and oppressive dogma in favour of humanism and a concept known as the Search for Knowledge, laid the foundations for a golden age of reforms and advancements that propelled a nation across the stars.

Since finding a home on Bourak, Haqqislam has experienced a rebirth of artistic and scientific pursuance that is the envy of their rivals. Gardeners refine terraforming techniques that have reshaped an arid world, doctors perform miracles with pioneering surgery, and biochemists cultivate new synthetic wonders with Silk. Though often considered one of the smallest of the G5 nations, Haqqislam remains unrivalled in several arenas.

A Silk monopoly and extensive trade routes have spawned a nation of traders that often draw the envy and ire of competitors, though the Sword of Allah stands ever ready to smite the enemies of the Word. With new insights into the New Islam and its proponents, this sourcebook will take you further into the Search for Knowledge than ever before!