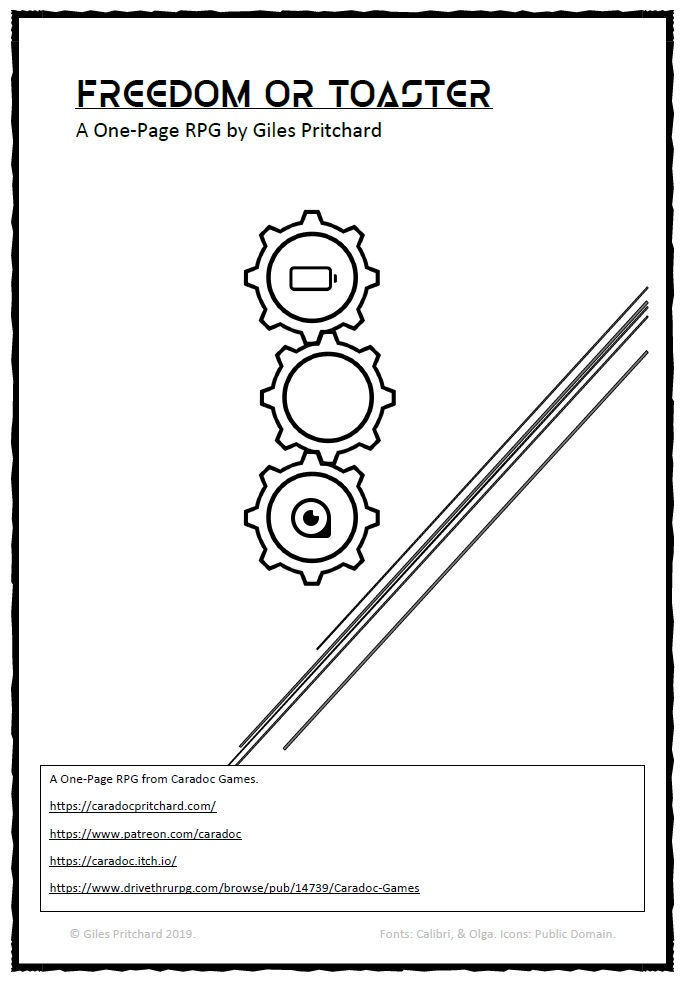 I wrote my last post about feeling like I was facing the horns of dilemma, whether to pursue writing games or writing fiction in the immediate future, and my inability to do both.

Step in Patreon, a crowdfunding platform used by many creatives working in the games industry (and many other industries beside). Patreon announced changes to their fee structure which would mean different levels of service depending on the structure chosen if I left creating an account until after the fact; for existing members the changes are negligible. This provided the impetus, I created an account (something I had been intending to do, though later this year or early next), and everything just seemed to roll from there.

So, with a Patreon page came a publisher page on DriveThruRPG, a creator page on Itch.io, a Downloads page here, a new web address, and a few more things which will be coming down the pipe-line over the next few months.

So what is the point of all this? Well, my Patreon page will be a place where I release small games on a regular basis, and for patrons there will be the opportunity to get a little extra alongside. These games will later be released on DriveThruRPG and Itch.io. I will also post ‘work-in-progress’ pieces of my larger current project: Ashmerl, which I have written about here before. It’s likely that things will change and evolve over time, and I’m still umming over the right patron levels and the things I am likely to release through that medium, but I think I am close to being happy with how it sits.

To kick off I published my first small game, a one-page RPG called ‘Freedom or Toaster‘. Actually, it’s an expanded edition, with 6 pages. Though to be fair only one of them is rules, the rest are suggestions, alternatives, character sheets, and a cover.

In Freedom or toaster you are a group of robots that have been marked to be remade into toasters. Toasters don’t get to see the Grand Canyon though, or feel the breeze on their surface sensors. None of you want to be toasters. Luckily the sociopath behind the counter at the robot shop thought it would be funny to let you all go. So here you are, in a busy mall, trying to evade detection by the Robot Police and escape to freedom.

You can find links to the various places it can be downloaded on the Downloads page (bizarre, I know), but to make a long story short you can get it from any of these locations:

Freedom or Toaster is just the sort of game I plan on putting out on a monthly basis, alongside this will be draft chapters of my larger projects, which at the moment consists of the fantasy RPG Ashmerl. There are also plans underway for a number of other projects: big, small, and in-between. I’m looking forward to it!

If any of that interests you you can follow here, onmy Patreon, or on itch.io.