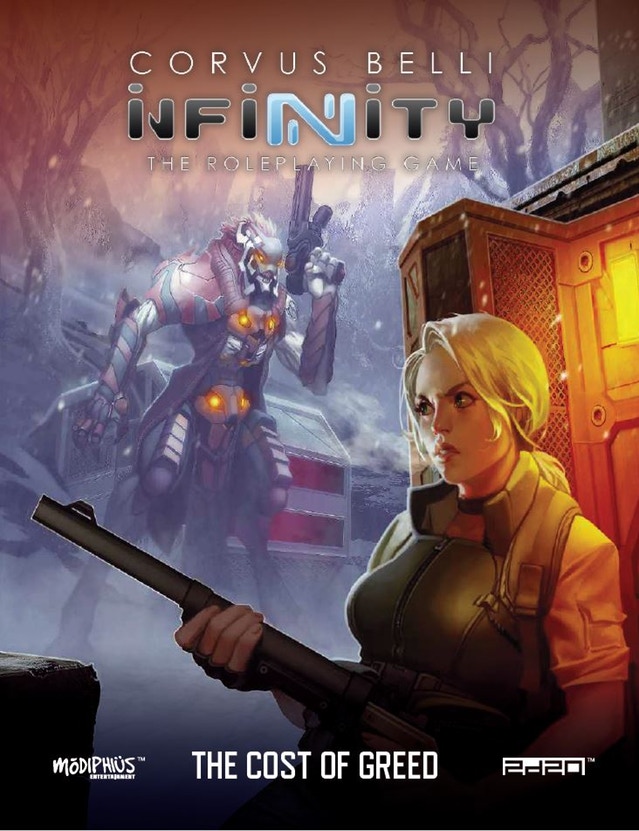 It’s very exciting to see a project you have worked on getting closer to release, to see the amazing art work, maps and layout all making the thing pop. The latest update for the Infinity Role Playing Game Kickstarter dropped the other day, and along with it came a PDF for backers, of a campaign I wrote: The Cost of Greed.

A chance discovery on Paradiso leads to the uncovering of a VoodooTech smuggling ring, with the clues pointing to an intelligence agency or corporation. Follow the rabbit hole, follow the money, and the trail of breadcrumbs may soon provide clues to a plot that could put the entire Human Sphere at risk.

The Cost of Greed is a mini-campaign of five non-linear adventures that provide the characters with a chance to meet, work alongside, and challenge the key characters from Corvus Belli’s Dire Foes Mission Packs 1 to 5.

• First Domino: Follow the trail of a smuggling ring trafficking
VoodooTech from Paradiso to the crowded streets
of Yinquan. Will the tight-lipped Yănjīng be involved,
or perhaps the shady MagnaObra corporation?

• Ice and Fire: Seeking clues to the architect and purpose
of the smuggling ring, the characters will need to brave
the icy cold of Svarlarheima to find the answers they seek.

• Quantronic Noise: A hacking cell operating from
an enclave on Bakunin are a key factor to the operation.
Their ability to manipulate the characters’ patinas,
however, may flip the Wilderness of Mirrors on its head,
creating enemies of both civilians and friends.

• Hot Sands: Chasing an executive for intel she’s
hiding will lead the characters into a fight to survive
on the Silk Route, but her enemies could prove more
overwhelming than expected.

• The Black Box: With the very war on Paradiso under
threat and the safety of the Human Sphere at stake,
infiltrating the operational centre of the cabal
responsible could turn disaster into victory.

Key to these adventures was providing scope for the players to meet and interact with well-known characters from the Infinity universe. The missions in The Cost of Greed begin in parallel with the Dire Foes Mission Pack 1, and then spiral from there, drawing in the main characters from Mission Packs 1-5. I hope those GMs and players who manage to play through this campaign find a little of something for everyone. Each adventure aims to allow different player character’s to shine, and hopefully offer some interesting challenges along the way!

I’ve written this before: it’s one thing to see the words on a computer screen, and it’s entirely another to see everything come together in layout, with art, style, maps and so on, in place. It reminds you that something like this is a team endeavor, a fact that is easy to forget when you’re knocking away at the keyboard in the privacy of your own home. Scrolling through the PDF I am reminded how talented the pool of people at Modiphius is, and I for one am greatly impressed (though naturally, I’m biased)!

The Cost of Greed PDF is currently available to backers of the Kickstarter, but it won’t be long before the files are off to the printers, and then the book, as a physical item, will see the light of day.

The PDF will soon be available to purchase from the Modiphius online store, followed in due course by the physical book.

I thoroughly enjoyed writing this campaign, and I hope anyone who reads or plays it gets as much fun from it as I did!