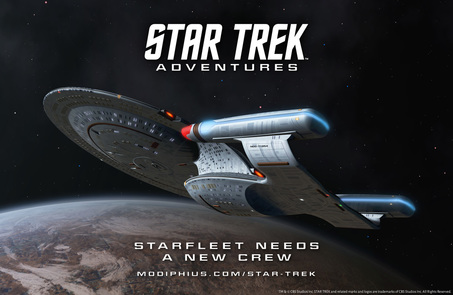 Earlier this year an adventure I wrote for the Star Trek Adventures line from Modiphius, Trouble on Omned III, was released for sale. The adventure puts the intrepid crew of *insert ship name here* in the middle of a social and medical crisis that could well spill over into armed conflict. I tried to write an adventure that was classically Star Trek, one where science and diplomacy could have as much chance, if not more, of solving the brewing conflict as any feat of arms. The other day I found a review on DrivethruRPG, by Megan R. of this adventure and it made me smile.

I won’t quote the whole thing, which describes aspects of the adventure for anyone who might be interested in buying it (you can see it here), but the last line particularly gave me a thrill:

This is a nicely-constructed adventure that has a real Star Trek feel to it – it’s easy to imagine it as an episode in the show. The party’s actions will have a lasting effect on Omned III.

Review on DriveThruRPG by Megan R.

While it’s satisfying to read that the reviewer thought the adventure was nicely constructed, reading that she believed it had a Star Trek feel to it, that it could be imagined as an episode, was exactly what I was aiming for. I know this adventure won’t be for every group, and that adventures are, by their very nature, subjective, and dependent on the GM and play group. I also recognise that this would never have been released without the wonderful support and work of all those boffins at Modiphius who are part of the excellent Star Trek Adventures team. It is nonetheless nice to read that the feeling I was aiming for resonated with someone! Thanks Megan! I hope your playgroup had as much fun playing this as I did writing it!

The smile I felt as I read those words is a good reminder: I should do more to write about the games and game products I love, and why I love them. Putting those ‘feels’ out there helps share the smile I felt with the writers, creators, artists and team that put the games together.