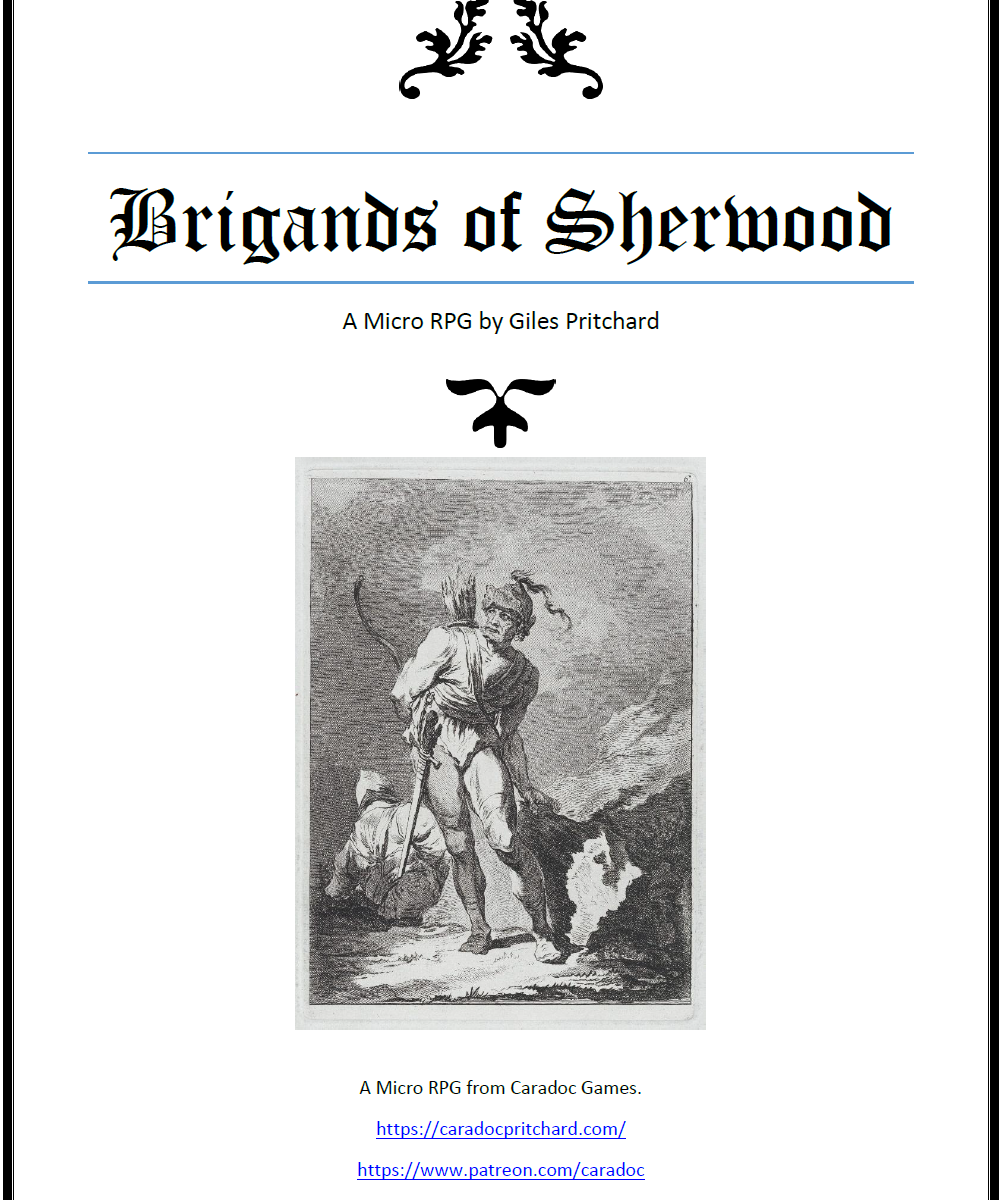 It used to be that a person could make a handy living robbing passers-by in Sherwood forest, but since Robin and his Merry band of fools turned their hand to it, everyone expects a good old dose of ‘giving to the poor’. It’s hard to make a living when every starving beggar has their hand out!

Brigands of Sherwood is the second in my series of micro-RPGs. In Brigands of Sherwood the players are criminals trying to end their adventure with as much loot as possible. The trouble is, that with the return of Robin Hood, everyone expects stolen goods to be redistributed to the peasantry! The characters are simple dishonest thieves trying to steal enough loot to retire, will they be able to fill their loot tracks? Or will the presence of Robin Hood mean they have to give it all away?

The rules are simple, and players have the chance to take a shot, by flicking a disc or die, to gain a bonus to their skill tests. This expanded edition includes some extra rules and an alternative character sheet, as well as a short adventure sketch. It’s available now, from my Patreon, Itch.io, or DriveThruRPG (and you can find these links on my downloads page!

Each month I plan on releasing one of these micro-RPGs. Beginning from next month (June, 2019), the basic versions will all be available for free from Itch or DriveThruRPG, the expanded versions will be available at a nominal cost, or through my Patreon page, which you can find here. Yes, the expanded versions don’t include anything earth-shattering, and you won’t be missing vital information if you opt to get the free download. The expanded version is just a way of saying thank you to anyone who chooses to support me through my Patreon, on DriveThru, or on Itch.

As well as writing these micro-RPGs, I am continuing to work through the writing and development of the fantasy RPG Ashmerl. One of the things I am most pleased with is how the character and setting development is shaping up. As you create your group of characters, you also create the Enclave (the village or town) that your characters are from, important landmarks, experiences, and people all shape the setting and make it uniquely tied to that group of characters. My playtests of this system have been fantastic, with campaigns worth of story hooks rising from the character creation process. In the few months I plan on putting the early draft of Ashmerl on my Patreon, it’s still a work in progress, but it’s getting closer!