Last post I put on my rose coloured glasses and gazed back into the mists of the year just gone. With the quiet determination of someone desperate to prove to themselves that their time was not wholly spent on Netflix, Twitter, or picking LOL Dolls up off the floor after my daughters, I busied myself with looking at the achievements of the year. That done the next task is at hand, looking forward, setting goals, gazing at the metaphoric mountain peak that lies somewhere in the cloudy distance of 2019 and plotting the climb. Of course, I’ll probably stay at the base camp for a while… It’s warm, has good WiFi, and watching the social media rage of a bunch of people upset that Gillette dared to suggest that being a decent human being is worth the effort is both depressing and amusing, though mostly, I fear, the former.

Where was I? Ah, Goals! A capital ‘G’. Not capitalised for any of the normal grammatical reasons of course, but for it’s significance. Goals are those things we too often tell ourselves we would like to achieve while quietly recognising that, yes, it would be nice to achieve that, but the scones are warm, the beer is cold, and the cricket is on. Tomorrow will be the day I leave the metaphoric base camp…

The beautiful thing about tomorrow, of course, is that it’s tomorrow, and tomorrow, tomorrow will be tomorrow, and so on. Last year I managed to tick off a bunch of things, and I’m glad about that, but did it get me any closer toward my overall goal? What even is my overall goal? My five year plan? Well ultimately I’d like to Write. Write with a capital ‘W’, as in Write for a living rather than a hobby. So this year, my goal is to take some steps in that direction.

Now, I wrote a lot last year, and the year before, and the year before that. Somewhere between 100,000 and 200,000 words a year for the last three to four years at least. That’s good. Plus it’s nice to be paid for that work, but it’s not my own fiction, it’s not my own produce, it’s produce for other companies. It has helped me to build muscles I wasn’t sure I had, like the ability to sit down and write every night, to plot and plan and execute, and to hit deadlines. It has taught me to save, save, save, then back up those documents I saved, and make sure they’re backed up, and then just to make sure, save again. It’s taught me that sometimes I feel like writing and sometimes I don’t, and that the words that were dragged from my fingers, a month later, are impossible to differentiate from those that positively flew. Those are all good lessons. But now I need to make sure that 2019 moves me a couple more steps in the direction of my ultimate Goal (note the ‘G’). I need to write more fiction. I need to write more things that are mine.

So onto the goals!

I want to maintain my freelance work. It doesn’t pay brilliantly, especially in the Role Playing Game industry, but I enjoy it, and it has helped me get better. I have made some good contacts, and worked with great people. I’d like to keep all those things up.

I want to write at least one short story a month. Just one isn’t a lot, but there are other goals here, and other writing to do, so one is enough for now. I’d like to edit them, rewrite them, and submit them.

I want to finish plotting out one of the many novel ideas I have. I’d like to select one of those many and write it. I mean actually write it this year. Like hit 80,000 words by the end of the year. They don’t have to be brilliant words, they don’t have to be the best words, but they have to be written words. As the saying goes: you cannot edit a blank page.

For some reason or other I started writing a role playing game last year, rules, setting, the lot. I’d like to finish that this year. I’d like to finish it, and then decide what I’m going to do with it next, maybe not in that order. If it feels good I may look for a publisher, I may look to Kickstarter, I may just publish it as an indie game online, but I want to do something with it. It feels good right now, and I want to explore it further. I like the foundation, I like the setting concepts and themes, I like this beginning I have, and now I need to add flesh to that skeleton and see if I can bring it to life.

I want to keep up with the writers group thing I started doing with a friend of mine. It’s been good, and encouraged me to write more, even if just to keep up. Meet up every fortnight, and maybe connect to other writers in our area, who knows.

I want to read, I know it seems silly, but it’s easy to relegate the things you assume you’ll do at some point to some other point that isn’t now. I read more last year than I have for many years, and I want that to continue. I used to read voraciously, and while I have other ways to spend my evenings now, the curse of being an adult, I need to read.

I want to role play on a regular basis. I managed it for most of last year, so it shouldn’t be too hard to replicate that goal. Testing the adventures I am writing for other companies, testing the system I am developing for my own RPG, playing another published game, whatever, just playing.

I want to make sure I game with my family, that’s board games, of which I have too many by any reasonable standard. But a game every night or every couple of nights as a family is the goal. Oh, and gaming with my wife, just the two of us. We used to game a lot together, and then we had kids and that became less, so making sure we spend the time to reconnect over that shared passion, a board game and the occasional movie of course.

Well, I think that’s enough for now. Some goals laid down for the coming year, hopefully achievable. We shall see!

I set out to write a short story. I worked through the draft and it took longer than I anticipated mainly due to the research involved. The next step is editing. I am not a fan of editing. I recognise the importance of the process, the refinement, removal and alteration achieved through editing is fundamental in turning a merely ok story into a good one. I just find the process agonising. I’m sure I’m not alone.

My story has been drafted and now I need to take the next steps. A couple of people have read it and offered comments, which were greatly appreciated. They pointed out things I should have considered earlier. I need to check the science again, the timing of actions and events. I also need to make a choice.

The story sits at around 9000 words. It’s in novelette territory. Too long for a short story and not long enough for a novella or novel. I could cut it back by a couple of thousand words, but by the same token, there are aspects to the setting, characters and plot that could be followed. It could push into novella or novel territory if I think it feels appropriate to do so. It could be a serial. I think it potentially has the set-up to be any of those longer forms, and ideas are percolating. But… I set out to write a short story. Maybe I should cut it back, pare away those aspects that speak of larger actions and setting related machinations to focus on the core story. I haven’t decided yet. I’m waiting on some more feedback, I’m also going to finish a first edit, then leave the story for a week or two, get some freelance work I have on the docket completed, and come back to it with fresh eyes.

As for the first edit… This has been reading through for consistency. I also made a list of words from various online articles and blog posts that I should look at removing from the story. In MS Word I used the ‘find’ and ‘replace’ functions, replacing the words with highlighted versions of themselves so I can run back over and find them more easily. Then spot, hopefully, whether those words serve a function, whether they need to be rewritten or whether they can be cut.

Two useful sites I found some solid advice for words to avoid are TheWritePractice, and the website of Diana Urban. Both are well worth checking out!

I have finally finished my first draft of the short story I was considering in my last post.

It was a fight.

Not because of the fiction aspect, which I enjoyed immensely, but because, for better or for worse, it turned out to be a science fiction story leaning toward hard sci-fi. 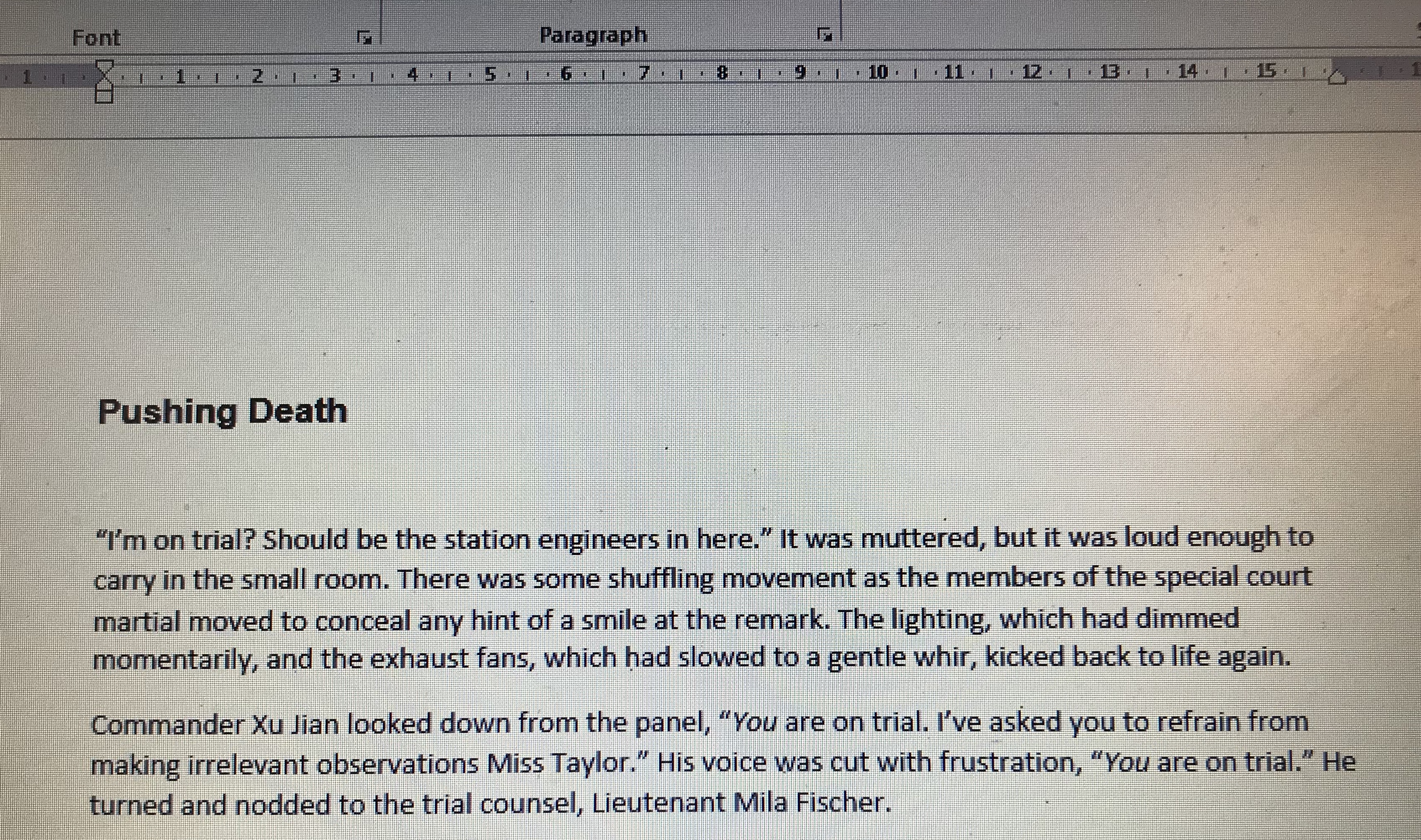 I had to research. Hours of research. As much time researching as spent writing. Maybe more.

I am no rocket scientist, and yet I spent hours reading about Delta V, orbits, the use of radar in space, specific impulse, and Indonesian swear words. Writing is funny like that.

I feel relieved to have finished. Elated. The next step lies ahead: editing. I am not confident I have all the science correct, so I need to check it and have it checked. I am not confident the story builds to a satisfying climax, so I need to have people read it, and I need a break away to come back to it. There are many things I think will need to change, and the emphasis on some things early on may need to shift or be removed. It may also be the start of a novel, and if it is, then that needs planning, otherwise I need to cut the word count significantly. So much to think about, and much to do.

All that aside however, the first draft is done. Done. Done and I am thrilled. I have the next story lined up in my mind (the next half a dozen truth be told), so we’ll see how it goes. I need to come back to this one, but I want to spend time away to asses it properly. It may be a week, it may mean writing something else in the meantime. Either way, I loved it, and am looking forward (strangely) to editing it.